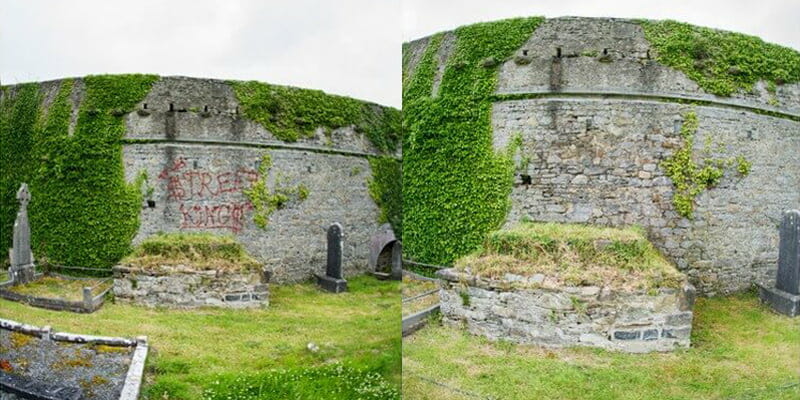 Killagha Abbey of Our Lady of Bello Loco, also called Kilcolman Abbey, is a ruined Augustinian abbey in Miltown, Co. Kerry. The Abbey was founded circa 1216 on the site of an earlier monastery which had been erected by Saint Colman.

The Abbey, dedicated to the Virgin Mary, was occupied by Canons Regular of the Order of St Augustine, until its suppression in 1576 during the Reformation in Ireland. It withstood many attacks over the years during the Desmond rebellion and the Irish Confederate war and was seized by Cromwell in 1641. Its most recent attackers were vandals who tagged and spray painted the ancient stones with red paint.

As the Abbey is a protected structure, P Mac were called upon by Kerry County Council to remove these unsightly tags and restore the stones to their majestic glory. Thankfully, we were able to remove all traces of the attack and hope that it will remain unscathed in its peaceful surroundings for another few hundred years.

Graffiti and gum removal is a service provided by P Mac in a wide range of settings. We are a Heritage Contractor, and employ a Graffiti Removal System which involves using a custom-built steam pack with a combination of low pressure and high temperatures to ensure no splash back, guaranteeing the safety of both our personnel and the public. Our expertise in graffiti removal is second to none, and we are well used to working on older or protected surfaces.