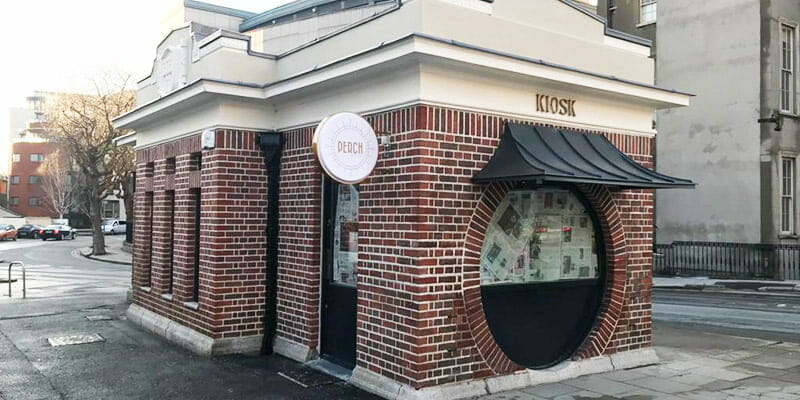 The team at P Mac was delighted to be awarded the contract by Dublin City Council for the complete facade restoration of the iconic Leeson Street Kiosk, located at the junction of Leeson Street and Adelaide Road. The great advantage for the client was our ability to take on the various restoration tasks the project required, from masonry to cast iron to hardwood replacement and traditional lead flashing.

Uncovering the many facades of the historic Leeson Street Kiosk

The building was designed by Michael Moynihan in 1929 as a water pressure station. In the following decades, it was used as public toilets, a kiosk, and, up until 2017, it operated as a cafe. Unfortunately, when the cafe was closed down the building fell into decay. It turned into a target for vandalism and graffiti and was a general eyesore at Leeson Street Bridge, one of the gateways into the city. Our brief was to repair all the remaining external fabric and to reinstate the lost features from the facade.

The exterior of the building is constructed from brick, granite and concrete with terracotta and concrete detailing. Cracks and open joints were visible on all four facades. Initial investigative works included hammer testing to identify the presence of any loose and/or de-bonded material. The parapet, doorways and other areas were tested with a cover meter to identify the presence of concealed steel or other metal. These were compared with the presence of cracks and/or other indications of decay and informed the process of repair.

The building had been partially repointed in the past with a grey Portland Cement mortar which needed to be replaced. Samples of the original mortar were taken and analysed to formulate the appropriate repair mortar. The size, colour and texture of the original bricks and window tiles were used as a basis for sourcing appropriate replacements for repairs. Once all investigative works were completed and agreed with the client and Dublin City Council’s Conservation Architect, we commenced the initial cleaning works.

The textured bricks, concrete parapet and granite plinth were cleaned using the DOFF system. The DOFF superheated steam cleaning system is designed to gently remove paint, all biological matter and general dirt and grime. It is perfect for the cleaning of heritage masonry because it eliminates the use of any chemicals and minimal water is used. Any persistent carbon staining was removed using a targeted chemical clean as well as a degreasant on persistent staining on the granite.

The original pointing used on the Kiosk was a technique called weather struck cement pointing. This was a pointing method introduced at the turn of the 19th century and was employed in Ireland to create a neat horizontal brick line on newly machine cut bricks while also allowing water to run off the brickwork. Interestingly, the mortar used for the pointing was a cement-based mortar which was just coming into vogue at the time and marks the decline of the use of lime in buildings.

The brief was to remove the later Portland Cement-based pointing only. Extreme care had to be taken to ensure joint widths were not increased. Raking out was carried out by careful scraping and picking, rather than hacking or grinding the mortar joints. Missing joints were repointed using replicate mortar to match the original weather struck technique. Corroded steel elements in the concrete parapet, cornice and door frames were removed and reinforced with steel where possible.

All significant cracks were opened up to remove corroding iron armature and repaired with stainless steel. Once all crack stitch repairs were complete, the concrete fabric was repaired. We cast moulds on-site from the remaining intact decorative details and used these to reproduce the decorative concrete detail on the parapet and door surrounds. We sourced matching salvaged bricks to rebuild damaged brick details around the windows and doors.

The iconic candy-striped canopy was restored conserving the original frame. This was covered and strengthened with RHEINZINK metal. However, it was agreed to return the canopy back to its art deco appearance and leave it with the RHEINZINK metal finish. All rainwater goods were removed. The few remaining cast iron pipes that were left on the building were restored where possible and later plastic additions were replaced with cast iron water goods to match the originals. All doors and window frames were replaced with new hardwood to replicate the original. The string course and parapet wall were finished off with new lead detailing using traditional methods.

And finally, the jewel in the crown was the restoration of the Dublin Crest on the parapet wall, the detail of which had been lost over the years. This was gently cleaned using the targeted TORC system. The TORC cleaning system is a stone conservation cleaning system used for the removal of more stubborn carbon staining as well as paint and plaster residue. Once cleaned, our skilled craftsmen carried out repairs to the plaque, reinstating the original engravings. Once the detail was revealed, the plaque was treated to a mineral wash to match the colour detail of the string course and to protect it from the elements for years to come.

The Dublin emblem – before and after

The client was delighted with the results, we are extremely proud of our achievement and happy to say the Kiosk is now once again open for business and operating as a thriving and busy cafe called PERCH.

If you would like to learn more about our expert restoration services, please get in contact today.