By Tracy CassidyPublished On: March 3rd, 2022

Bessborough House near Piltown in Co. Kilkenny was the Irish country home of the Ponsoby family, the Earls of Bessborough. This classical country house, set on 17,000 acres was designed by Architect Francis Bindon and was completed in 1755 . Unfortunately, successive Earls of Bessborough spent very little time in their Kilkenny estate and this magnificent house was very rarely inhabited until the early 1900’s.

Bindon’s design was that of a classical-style country house. The finish, in cut-limestone, displays details of expert stone masonry skills. Renovations to the house in the early 1800’s included the addition of the three-bay single-storey flat-roofed porch to the centre of the ground floor. This structure is what was causing problems for the OPW and why we were called in to repair.

Like many country houses at that time it was completely destroyed by fire during the civil war in 1923. Thankfully, the ninth Earl of Bessborough commissioned the complete restoration of the house. This is why it stands today as an impressive feature in the landscape, forming an important element of the architectural heritage of Piltown.

The house was sold by the Ponsoby family in the 1930’s to a religious order and was used as a convent until it was bought  by the Department of Agriculture in 1971. It has been used ever since as an Agricultural College and is now known as Kildalton College.

The deterioration of the Limestone Porch Structure

The Porch structure was a major cause for concern, it was deteriorating due to extreme dampness. Upon investigation it was noted the main façade of the house had been re-pointed in recent years but not the porch. The porch had been re-pointed at some stage much earlier with cementitious mortar. This pointing was in very bad condition and was the most likely cause of the water ingress. 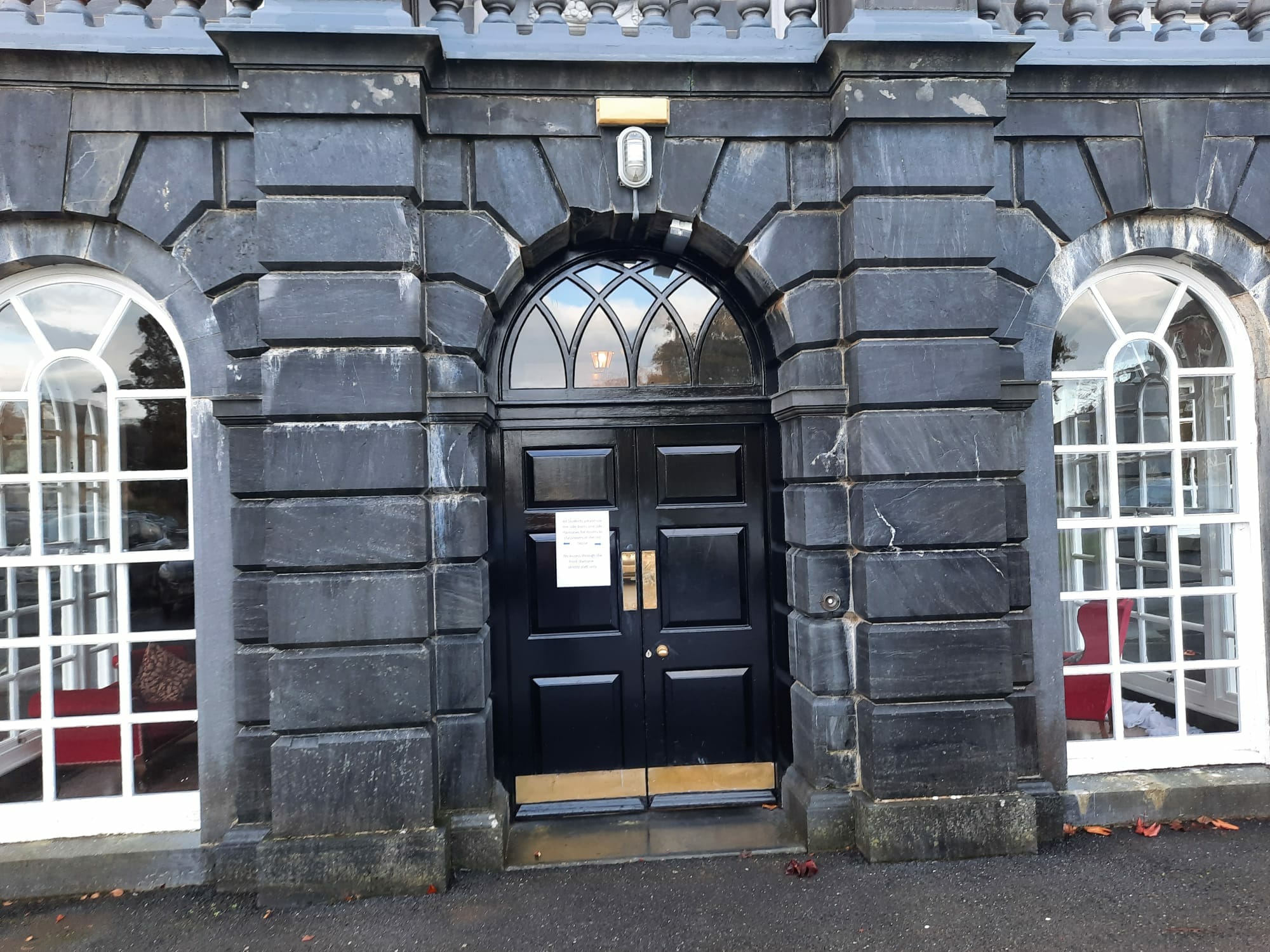 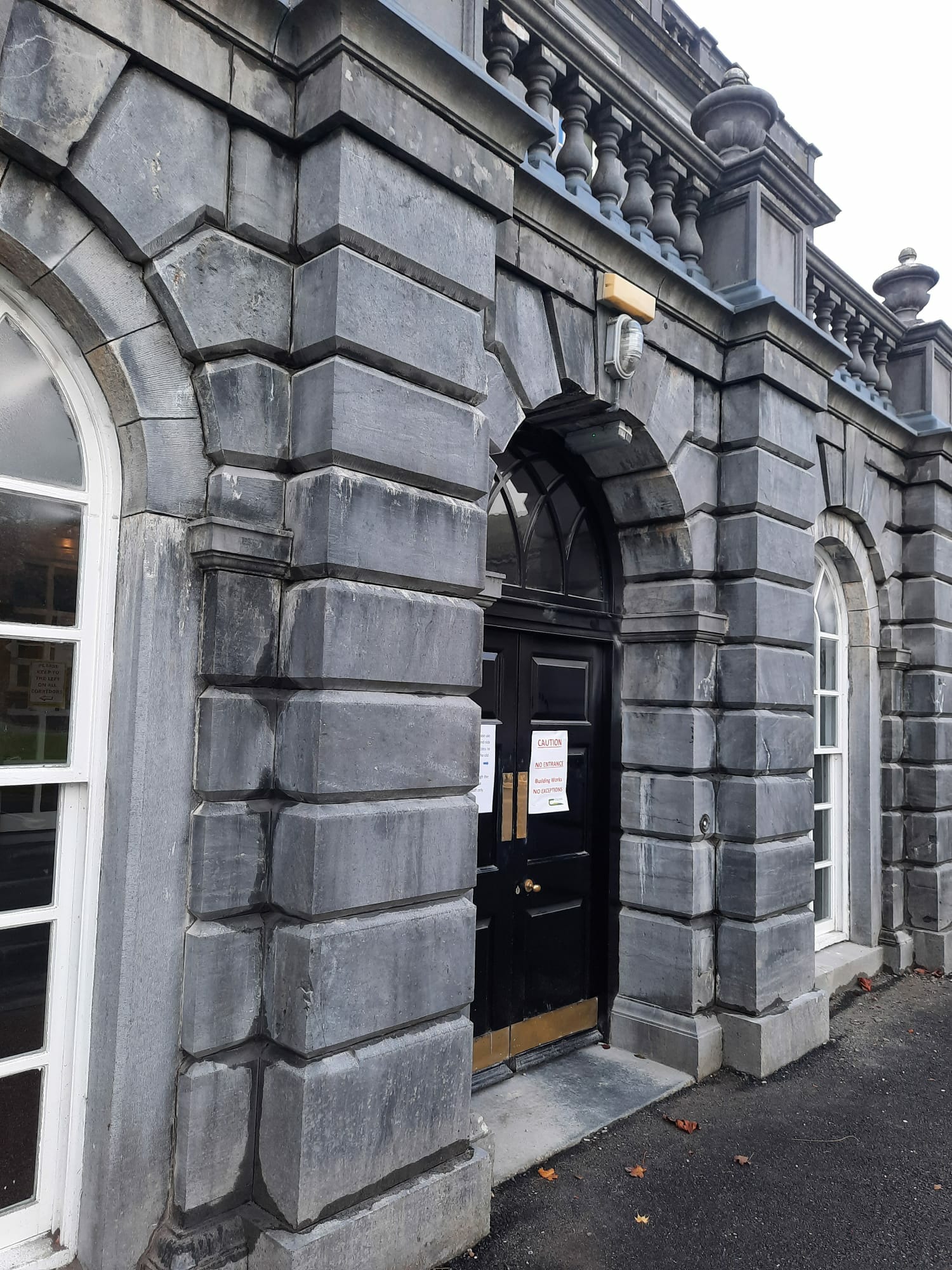 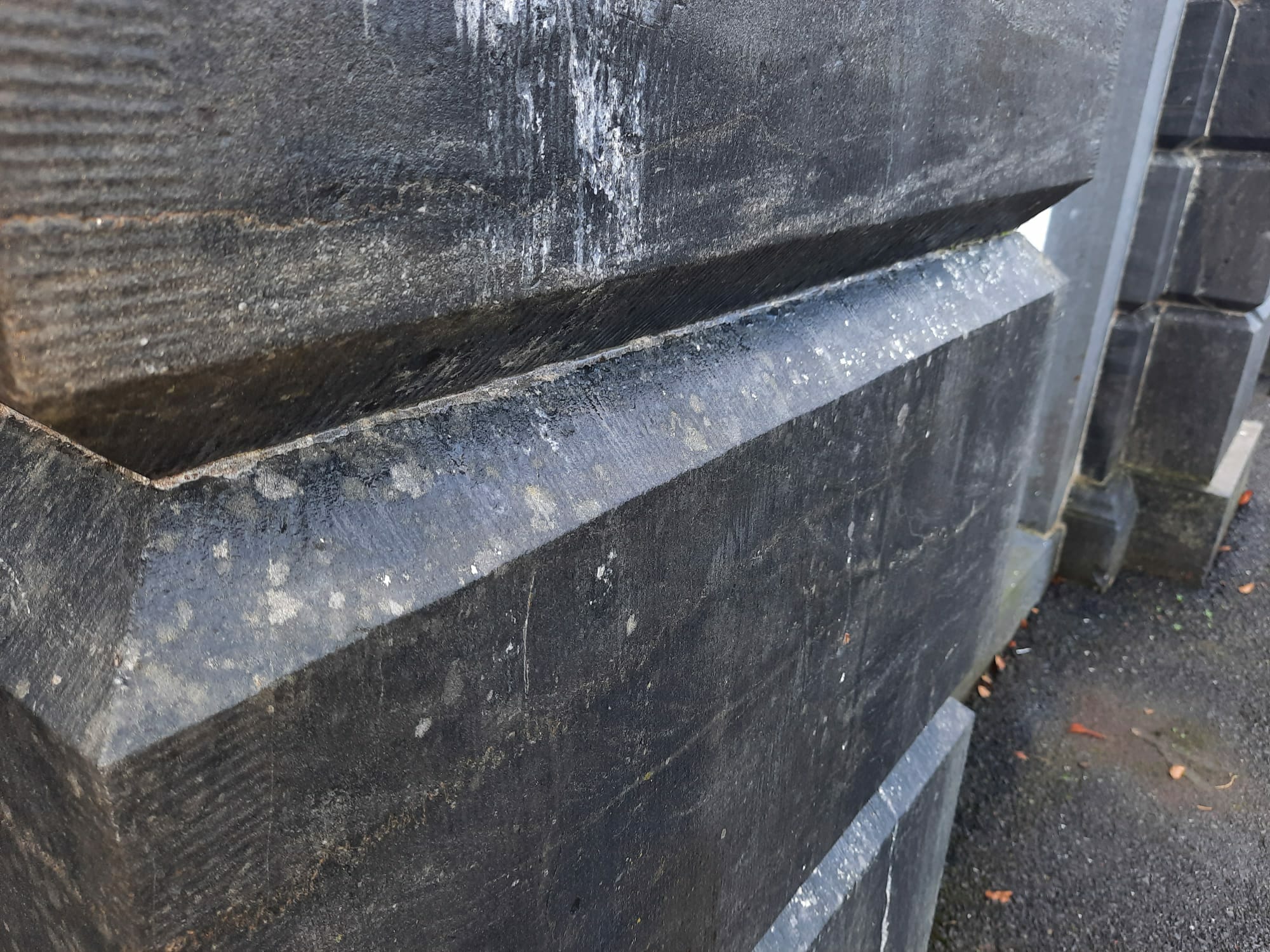 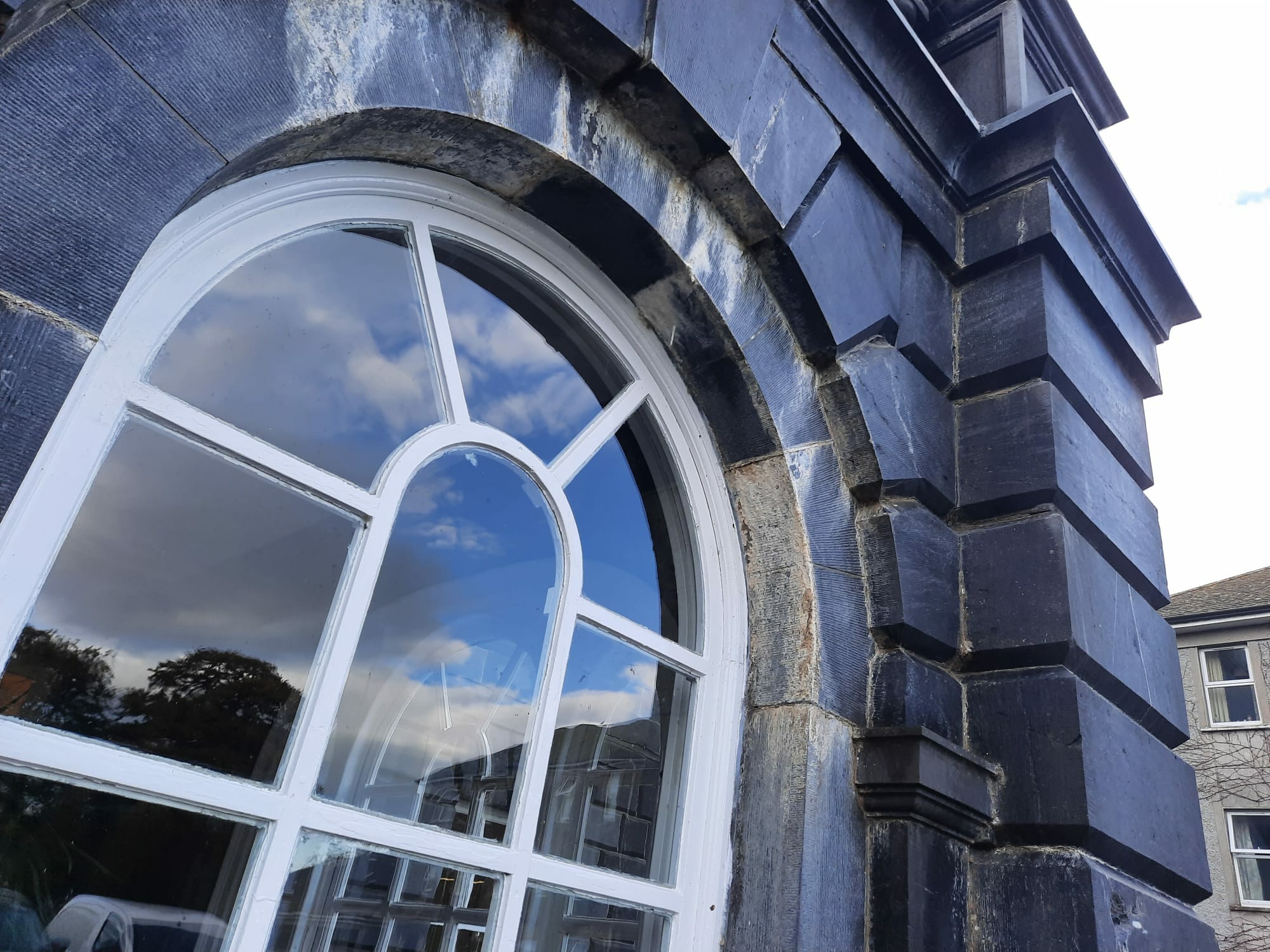 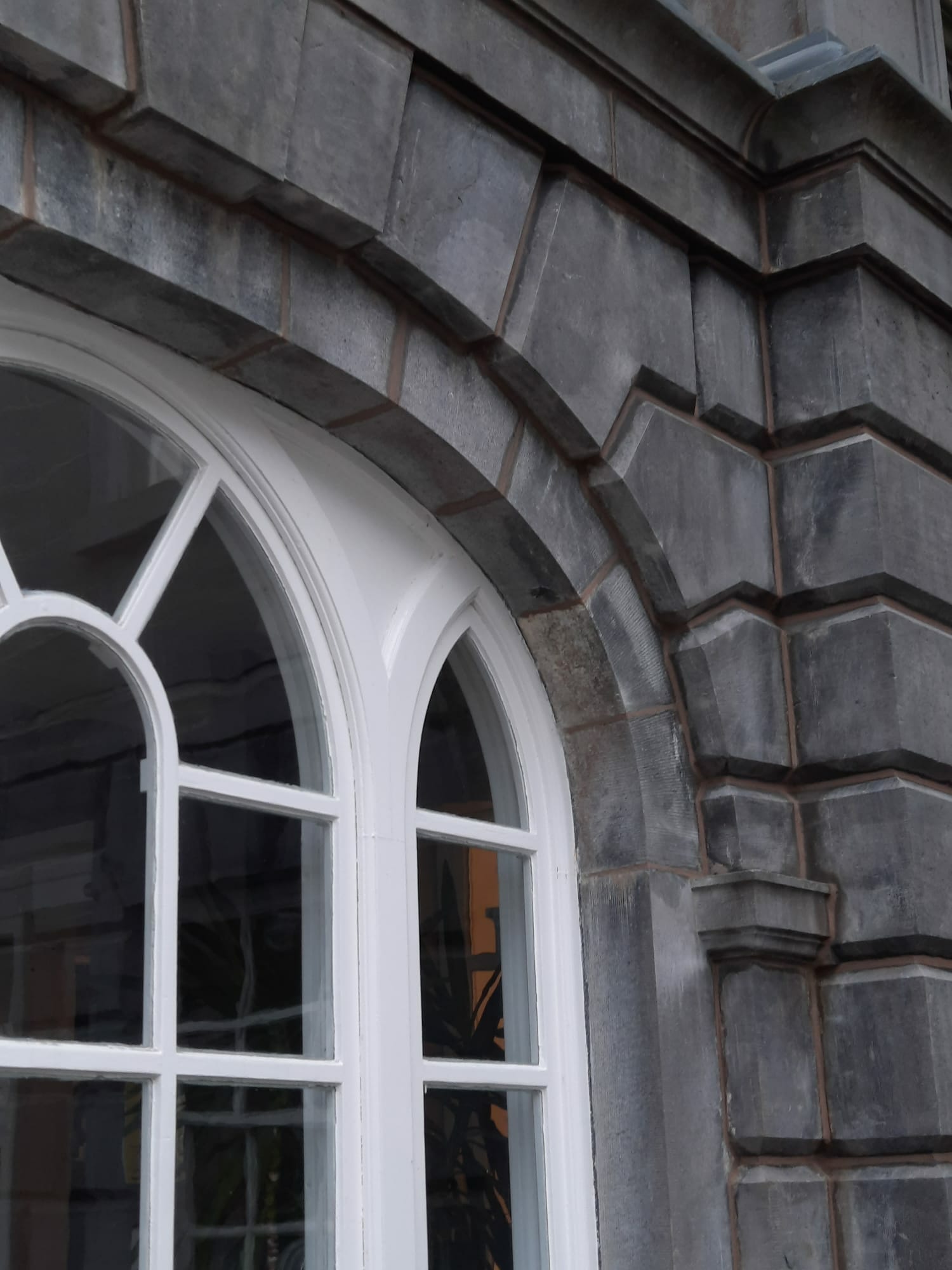 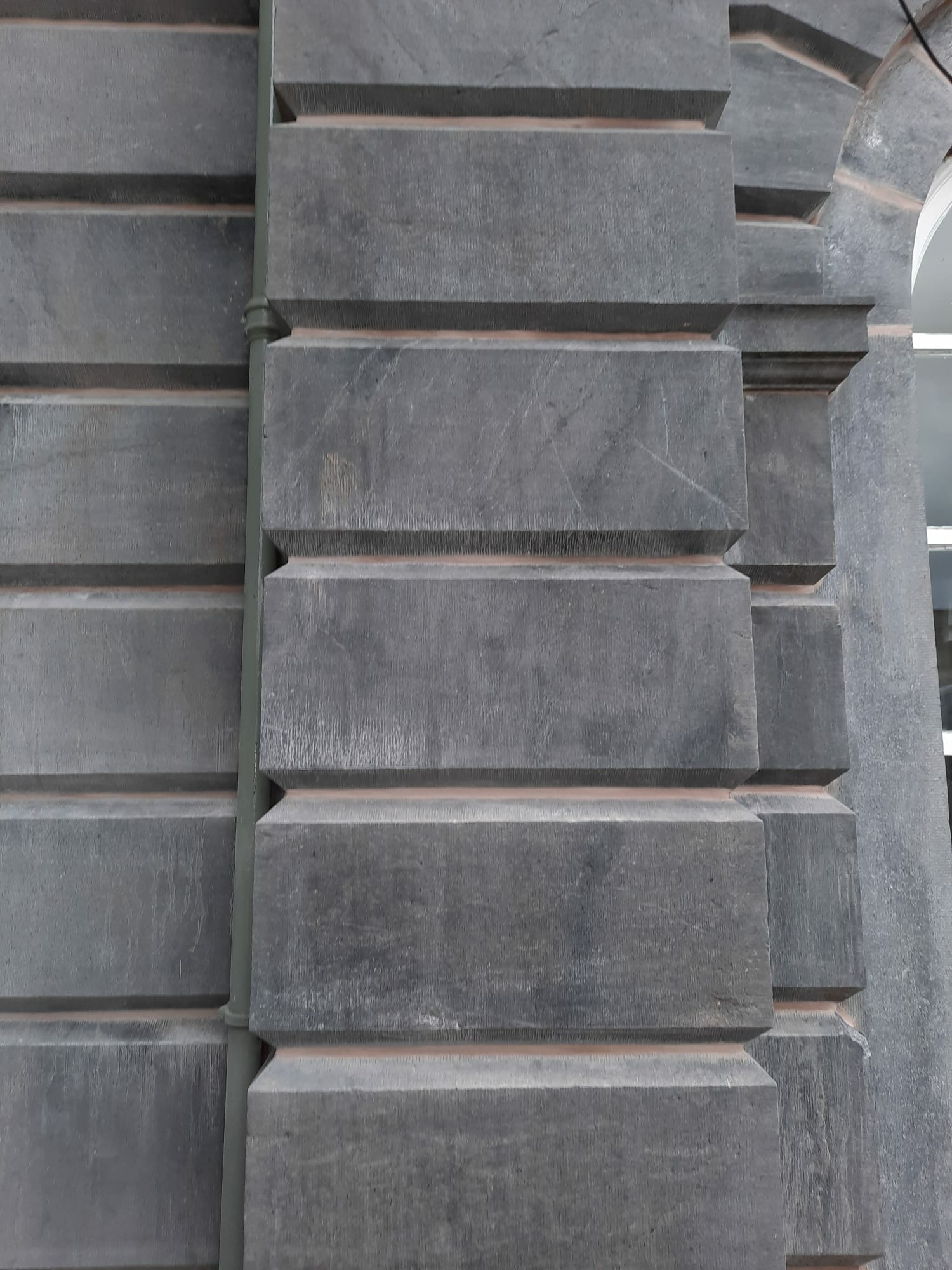 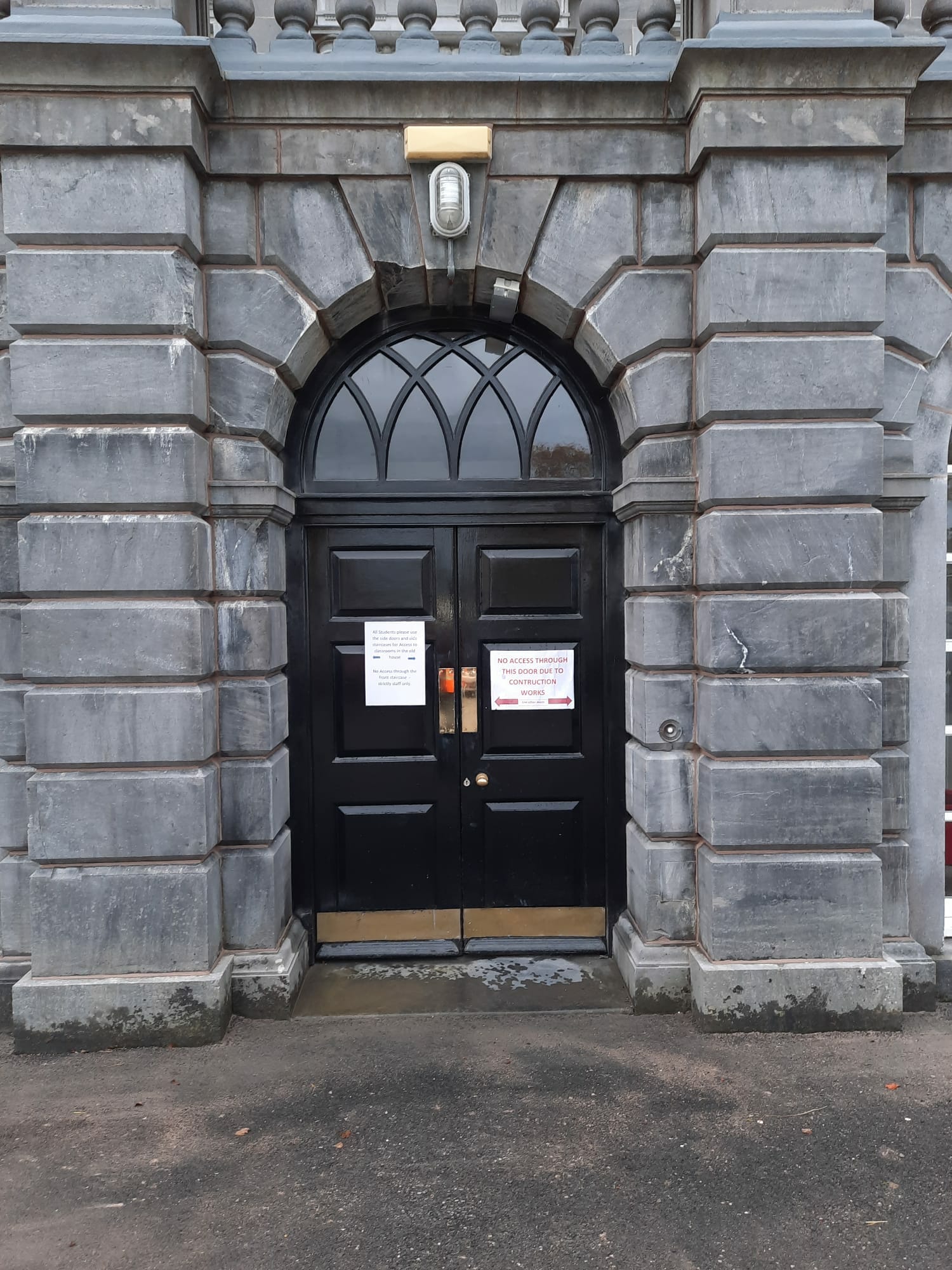 Mortar designed to match the original

We then proceeded to remove and clean out all mortar joints on the Porch. The stones were badly stained with limescale and efflorescence.  The mortar joints were extremely thin which made it difficult to get in and rake out the cement. This all had to to be carried out using hand tools.  Our experienced crew were very surprised to see water pouring out of the stones once mortar was removed. Water had lodged in the stones and was unable to escape through the cementitious pointing.  The stones were saturated, especially around the top of the structure. We were very fortunate with the mild weather for the duration of the project and once raked out the stones dried out in a few weeks.

Once satisfied the stones were dried out we cushioned the stones with a breathable lime mortar. This would greatly reduce the ingress of water and any moisture will now evaporate through the lime mortar joints.

In addition to this we also finished off the joint slightly protruding on the bottom edge of the joint, this will encourage water to run off the stone.

Another beautiful heritage building conserved for future generations. This work ensures that Bessborough House will remain a magnificent architectural feature on the landscape around Piltown for another few 100 years.