All of us at P Mac were thrilled when we found out that we had been awarded the contract by Flynn Management to restore the beautiful art deco mosaic tiled facade of the iconic Bewley’s Café.

With a four-generation history dating back to pre-famine times and a returning customer base for over 70 years, the devastation felt was no surprise when Bewley’s café, Grafton Street, announced their closure in 2015. What first was predicted to be a 6-month closure turned into 18-months, proving a long time for regulars to be without Bewley’s on Grafton Street. However, further investment and improvement was necessary to protect the future of this iconic landmark.

Bewley’s established its presence in Dublin in 1870 when they set up their first retail tea shop in South Great George’s Street. This tea shop became the Oriental Café in 1894, and two years later a café in Westmoreland Street was opened. Bewley’s Café on Grafton Street was established in 1927. From its opening in 1927, Bewley’s Café on Grafton street quickly became a popular go-to place for both regulars and tourists after a day’s shopping or as a meeting place for friends. It quickly became recognised as a landmark and found a place in the hearts of the Dublin people.

When Bewley’s reopened its doors on November 1st last year, the excitement was visible from the ques that awaited outside. Our team worked tirelessly on this project during the summer of 2017, and we are very proud to have worked on such an iconic building that holds such importance to people. We are delighted that the refurbished café still holds the coveted elements that make the building so special, including the Harry Clarke windows, the banquettes, ten open fireplaces and the Egyptian-modified facades.

How did we go about restoring the beautiful and iconic facade of Bewley’s Café? Our first task was to clean down the entire facade to reveal the true state of the substrate.  Once cleaned, we could identify the extent of the damage and the task that lay ahead.

The damaged and loose mosaic sections on the front facade needing restoration were identified. Lots and lots of photographs were taken before we removed the loose and damaged sections, numbered them and put them into storage for reuse. Replacement mosaic tiles were then sourced from Mosaic Assemblers.

Once ready, we re-bedded the original and replacement tiles one by one to match the original design using an approved tile adhesive. It was important to allow the tile adhesive to cure before we cleaned the entire area again and aged the new tiles to match the surrounding area. We then sealed the mosaic tiles with an approved sealer to give added protection from the elements.

Over time, due to a number of factors, including wear and weathering, the balcony had developed cracks and held the potential to collapse. To combat this, steel frames were put in place to support the balcony. These frames, however, once removed left large holes in the mosaic-tiled area which needed to be filled as seamlessly as possible. Again, we had to source replica tiles to match as best as possible to the existing surface.

The tiles used on the balcony were carved from natural stone in Italy and came in 6 different colours. The tiles were not the exact size of the originals when they arrived so we carved each tile individually to ensure they were flush with the existing area.

Prior to commencement, the entire area was cleaned down. The holes then had to be cleaned using a concrete repair mortar tool. It was important to ensure the holes were clean, dry and free of loose substrate. The holes had to be made square to prepare them to take the replacement tiles. The tiles were carved and installed bit by bit which made it a timely process, but very worthwhile when you see the finished result.

We needed to repair the entire curved section of terrazzo on the balcony ends as these had completely collapsed.  We treated the exposed iron with anti-corrosion paint and then fixed two layers of cementitious strips to the iron structures. On top of this structure, we built up the shape of the original curve of the balcony using lime repair mortar.  We then replicated the original look of this section of the balcony by rebuilding the frame with sourced black and gold glass mosaics from Italy.

We applied terrazzo to the central section, supplied by the Traditional Lime Company. The terrazzo was then honed and polished to expose the aggregate. A matching green terrazzo was applied to the outer border. The results are stunning and fit seamlessly with the rest of the restored facade.

As well as the restoration of the wonderful decorative elements of this unique facade we also carried out extensive works to restoring and conserving the less arty elements of this conservation projection. There were numerous drill holes present in the facade which needed to be filled meticulously using hand batches of approved mortar repairs ensuring the colour matched with the surrounding area.

There were also areas on the facade that needed to be repaired and repainted. These areas were brushed down and degraded materials were removed. A specialist repair compound was then prepared and used to carry out the repairs and fill the joints as required. These repairs were sanded down to ensure they lay flush and repairs were invisible to the naked eye.

The final facet of the job was to clean down the entire facade and to remove all traces of efflorescence and lime staining. It was a very proud day for us when the scaffold was taken down and the true extent of the restoration work was revealed. 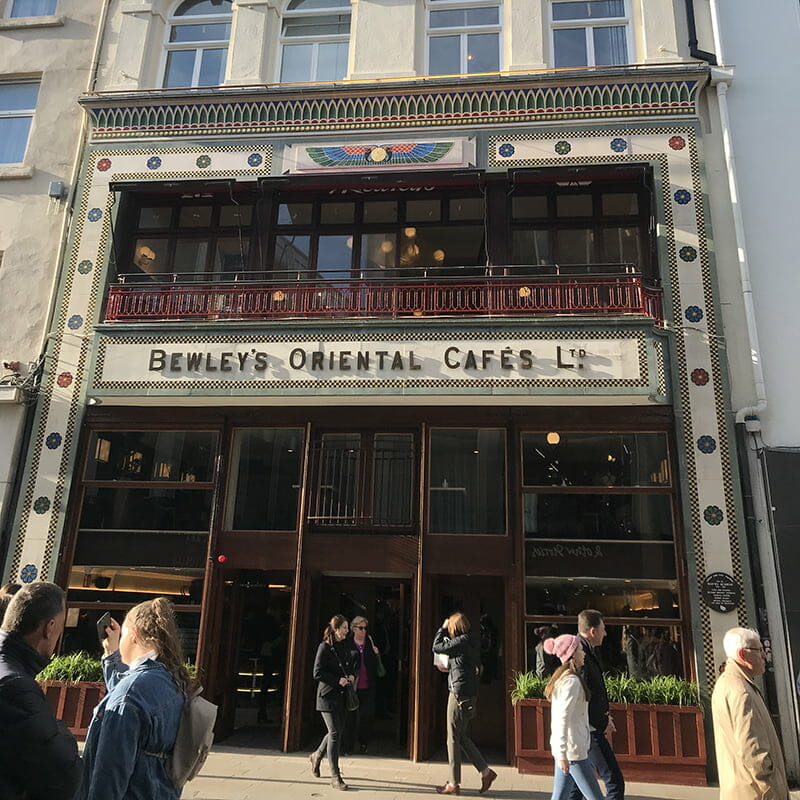 A proud day for P Mac and Bewley’s Café

The continuous excitement and praise for the refurbished Bewley’s Café on Grafton Street is a clear indicator of its continued success in the years to come. It is also, of course, great for P Mac by proving once again that our team have the knowledge, skilled craftsmanship to carry out all types of stone restoration works, no matter how complex.

Bewley’s has been in the heart of Dublin for generations and we are very proud to have been part of the refurbishment carried out in order to protect its future. By putting in the time to match everything to the original detail of the building, the café has retained its much sought-after characteristics that make Bewley’s so special. It is extremely rewarding to see that all the hard work done by everyone has paid off and we are excited to see the role it plays in the lives of locals and tourists for generations to come.